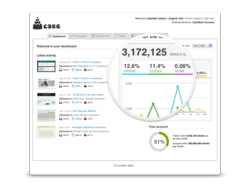 CakeMail, Inc., the leading provider of white label email marketing tools for web hosts, agencies and resellers announced today that the CakeMail platform is now available to cPanel hosting partners. This new integration with cPanel marks the first time a robust email marketing platform has been made easily available as a plug-in to millions of users via their website control panels.

cPanel powers the web hosting industry with its point-and-click software that automates the provisioning and management of websites. The tens of millions of website owners who host their websites with cPanel’s hundreds of hosting partners use cPanel’s easy-to-use interface to manage every aspect of their websites.

“Web hosting companies whose customers manage their websites with cPanel now have a powerful marketing tool at their fingertips,” said François Lane, CakeMail CEO and co-founder. “It’s easy for hosting companies to make CakeMail available, and even easier for their customers to sign up for free or paid accounts to manage marketing campaigns, generating revenue for their businesses and building better relationships with their subscribers.”

The fully-hosted email marketing platform is available as a co-branded or fully white label solution, and is easy for hosting companies to deploy, minimizing time to market. The sophisticated, user-friendly UI and easy email design tools allow customers to get started with the application and send their first campaign in a matter of minutes.

“CakeMail and cPanel were first introduced to each other at a networking event in Canada a number of months ago. Together our integration teams have developed extended functionality for cPanel & WHM that provides users with the ability to use CakeMail services from within our product,” says Aaron Phillips, cPanel Vice President of Operations. “We really enjoy working with companies like this that are able to take prototypes and ideas and bring them to life in a very short period of time.”

CakeMail is available today for cPanel customers who utilize WHMCS or Hostbill, with additional billing system integrations available on demand.

In other words, you only pay for what you need. SeekDotNet also offers Managed Services and

Webmasters that eager to customize and individualize server settings to its unique requirements will be excited to learn about SeekDotNet new Dedicated Server. As SeekDotNet’s Dedicated Servers is perfect for websites that require faster delivery and maximum performance. Plus, gives total control over web presence and best of all, offer Service Level Agreements (SLA’s) for all of its Dedicated Servers.

SeekDotNet is a worldwide company with representatives in United States and offering shared, dedicated and enterprise-grade solutions. It success has not come by chance but by its strong management team coupled with intelligent product design and strong customer support which has secured is position as a market leader.

SeekDotNet has an outstanding reputation in the hosting industry and plan on keeping it that way. SeekDotNet servers are some of the most reliable in the industry and monitored 24 hours

“This year we added 85 Apps in Softaculous, Webuzo and AMPPS, and we are extremely excited to be able to offer 260 applications to our users,” said Pulkit Gupta, Softaculous founder and CEO. “and the best part is we are still adding more apps which will further empower our customers to easily review, deploy and manage these powerful applications. We have also made huge progress with AMPPS and Webuzo.”

To address the needs of different hosting providers, Softaculous is available as a Free product or as a Premium product. The Free version has only 60 apps while the Premium version currently has 260 Apps.

This year the company also launched AMPPS for MAC and Windows. AMPPS can be used by Enterprises, SMB’s and Web Developers. Softaculous AMPPS is available as a Free product which can be installed on Microsoft Windows Desktop and Servers as well as on the Mac OS. AMPPS now has 260 Apps to serve the needs of different users. “AMPPS is specially beneficial to the Web Developers as they will not have to spend time installing Apache, MySQL, PHP, PERL, Python seperately and also they can install various blogs, cms, wikis, forums, etc. on their desktops by the click of a button. If you are a web developer and have not tried AMPPS, you have certainly not tried the best WAMP or MAMP stack” said Pulkit Gupta, COO of Softaculous Ltd.

Softaculous Apps are also available in the form of Virtual Appliances. The Virtual Appliances (called Webuzo) contain all the necessary server software required to power the various Apps. Webuzo is a LAMP stack with Softaculous installed on a CentOS Machine. Webuzo can help any user deploy Web Apps on their Desktops or in the Office. Recently the Webuzo Team announced support for the Amazon Web Services Cloud allowing Webuzo to be deployed in the Cloud which helps users to access their apps from anywhere.

Softaculous was founded in 2009 with the goal of helping users to deploy apps by the click of a button. Softaculous is already being offered by leading Data Center’s and Web hosting companies around the world.

Reseller hosting has become a promising business with its flexibility and cost-cutting measure. This line of business allows company or entrepreneur to set up as many websites as they need with minimal cost and no technical expertise. This is primarily because the main web hosting company manages all the hardware and software.

Amongst other online businesses, reseller hosting is one the most doable choices since it only requires minimum start up cost. A business newbie or person with low resources can build and maintain a small business which can result in high profits in the future. Also, there is a prospect of extra income generation for the reseller.

Another point that distinct ASPWebHosting from any other web hosting companies is it allows reseller to have the control panel source code. This means reseller can edit and modify font style, menu structure, navigation, css and every text on his control panel according to his needs. Then he can upload and install to his website such as controlpanel.yourdomain.com and his clients will not know he is a reseller. This feature is called the Unlimited Reseller Depth system.

This reseller plans also include DotNetPanel which is supported by WHMCS billing system. WHMCS is the perfect and complete all-in-one client management, billing & support solution for your Web Hosts. WHMCS is an effective and efficient tool to manage web hosting business. It also automates many routine tasks including invoicing, order provisioning, suspensions, and more.

ASPWebHosting.com.au was established in 2004 as a web hosting company offering businesses a cost-effective, flexible means of setting up, monitoring and maintaining websites which could include advanced features like online shopping and database functionality. It also provided the infrastructure and interface tools that allowed web developers to focus on the job of web design.

For more information, visit them at http://www.aspwebhosting.com.au